The market for artificial intelligence in drug development and discovery has been one of the most hyped in recent years. The potential impact this industry can offer to human health and pharmaceutical development has grown in concert with the enabling technologies in computer processing, digitalisation and fundamental research in machine learning.

Emersion Insights has analysed the investment landscape as part of our market intelligence service for AI in Drug Development. In this article, we take you through the progress the industry has made in the first half of 2021.

What Has Happened in the Industry This Year?

As the confidence in AI for drug development grows, new partnerships between AI specialists and pharmaceutical companies are announced daily. This year has already offered major headlines about new collaborations and milestones from existing partnerships. Here is a selection of main developments during the first half of 2021:

2020 was a fantastic year for funding in AI drug development. Although the number of funding rounds peaked in 2018 and has been decreasing since, the total annual investment value reached new heights in 2020. In fact, the average funding size has increased from $10.7 million in 2015 to $51.7 million in 2020. Investment rounds are becoming fewer, but bigger, and the high investment activity we saw last year has continued into the first half of 2021. During the first half of 2021, the investment value has already reached $2.1 billion, or 71% of last year’s total value. 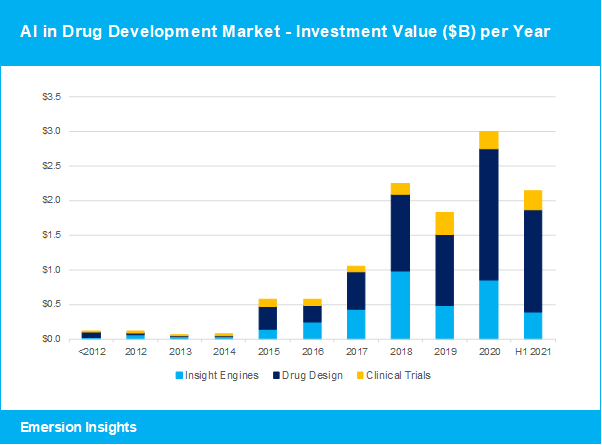 Some of the major Series A and B fundings this year include: 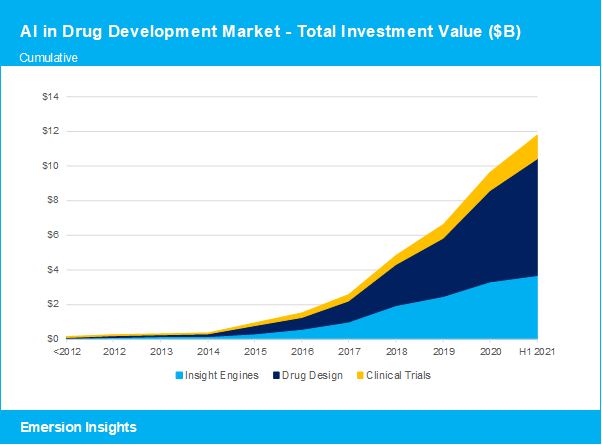 With a total of $11.8 billion funding in the industry and $2.1 billion invested already this year, 2021 is well underway to become a landmark year for AI in drug development. Emersion Insights has categorised the investments according to company focus into Insight Engines, Drug Design and Clinical Trials.

Insight Engines are artificial intelligence platforms that aggregate and analyse information and real-world evidence from multiple sources such as scientific literature, patient data and clinical trial information to find new associations and guide drug discovery or clinical trial optimisation. Some of the Insight Engine vendors funded this year include Aetion, Cellarity, Causaly and Elucidata.

Drug Design applications are using AI to develop new molecules, predict and optimise drug specificity and efficacy or select drug repurposing options for existing drugs. Some of the Drug Design vendors funded this year include Insitro, Exscientia and Insilico Medicine.

Clinical Trial applications help optimise the clinical trial process by improving patient stratification with finer nuances to get the right patients for the right trials, optimise enrolment and retention, and in some cases help reduce the number of patients needed for a successful trial. Some of the Clinical Trial vendors funded this year include Medable, Mendel.ai and Novadiscovery.

This year already offered a glimpse of what’s coming next as significant strategic developments occurred in the first six months. IPO’s, acquisitions and technology partnerships between AI specialists were all represented.

Although only a few startups in this industry have gone public, IPO’s are occasionally announced. This year, Adagene closed its IPO raising $161 million in gross proceeds, and the Danish AI-immunology company Evaxion Biotech raised $30 million on its IPO on Nasdaq.

In the coming years, we will start to see the leading AI specialists acquire smaller players to strengthen their overall offering as part of a long-term CRO strategy. The intention is to become best-of-breed partners to the pharmaceutical industry in a specific area, and then gradually broaden their scope and capabilities to become preferred industry partners across multiple areas. At this point, only a few companies have the scale to go for this strategy, but we already see steps in this direction.

A couple of development partnerships between AI specialists were also announced in the last six months. Cyclica established partnerships with PrecisionLife and South Korean Oncocross, and QIAGEN, in the AI world best known for their Ingenuity Pathway Analysis (IPA) and Digital Insights portfolio, formed a partnership with GNS Healthcare.

As the industry matures, we can expect to see more Series C, D and E funding rounds being announced in the next 6 months, likely making this year’s total investment value exceed last year’s record. Further development partnerships between AI specialists will be established, and some of the already existing partnerships will result in mergers and acquisitions as the consolidation in the industry continues. Acquisitions by big pharma will most likely remain relatively sparse in the short term, however, in the coming months, we may see further acquisitions by large drug discovery CRO’s and AI specialists going for a long-term CRO strategy.

Get our latest updates and news

Sign up to our newsletter which provides you with regular insights, white papers, market data and presentations from Emersion Insights